Why Optimism is Deadly in a Crisis 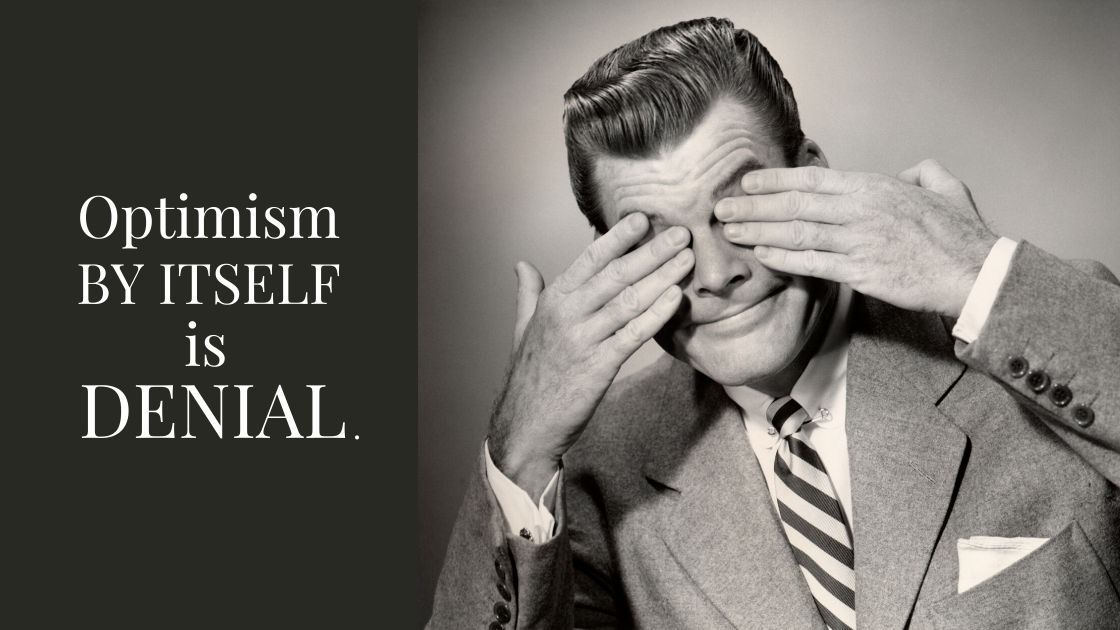 I’ve faced some pretty tough situations in business during my career.  Like the time one of my clients lost millions of dollars in a single year and his bankers were considering calling their loans.  Or the client who realized that a long-time partnership had to end, and they were faced with a messy business divorce.  Or the client who was betrayed by a trusted employee who left and took a big customer, instantly putting the future of the business and his family’s financial security in jeopardy.

Now in 2020, we all find ourselves in what seems like an unprecedented crisis – businesses forced to close and go long weeks with no revenue.  Even with the emerging stimulus measures, this seems like an impossible situation for many entrepreneurs and leaders.

Most people are facing the crisis as they do everything else – either with pessimism or optimism.  Optimism is generally considered a virtue, but in a crisis, it can be deadly because by itself, it is actually denial.

Hope for the best, prepare for the worst – the Stockdale Paradox mindset

We business leaders can learn a lot about what is necessary to survive from people who have endured far more horrific situations than a recession; prisoners of war like Vice Admiral James Stockdale.

Stockdale was one of many Americans held captive for eight years in the “Hanoi Hilton.”  He was isolated in solitary confinement for four of those years, restrained in leg irons for two years, and was tortured many times.  He credited the social support of his fellow prisoners through a “tap code” they used to communicate as one of two key factors which enabled the survivors to persevere under such unimaginable circumstances.

The second key factor is what has become known as “The Stockdale Paradox” – the ability to believe, without wavering, that they would ultimately prevail, while still confronting the brutal realities of their situation.  According to Stockdale, this was the difference between those who survived and those who didn’t.  Those who were merely optimistic “died of a broken heart,” while those who balanced optimism with realism were the ones who ultimately made it home.

Jim Collins recounts a conversation he had with Stockdale when he was writing a chapter on him for the book, Good to Great:

He said, “Well, you have to understand, it was never depressing. Because despite all those circumstances, I never ever wavered in my absolute faith that not only would I prevail—get out of this—but I would also prevail by turning it into the defining event of my life that would make me a stronger and better person.  Not only that, Jim, you realize I’m the lucky one.”

He said, “Yes, because I know the answer to how I would do, and you never will.”

A little later in the conversation, after I’d absorbed that and said nothing for about five minutes because I was just stunned, I asked him who didn’t make it out of those systemic circumstances as well as he had.

He said, “The optimists. Yes. They were the ones who always said, ‘We’re going to be out by Christmas.’  Christmas would come and it would go.  And there would be another Christmas.  And they died of a broken heart.”

Then he grabbed me by the shoulders and he said, “This is what I learned from those years in the prison camp, where all those constraints just were oppressive. You must never ever ever confuse, on the one hand, the need for absolute, unwavering faith that you can prevail despite those constraints with, on the other hand, the need for the discipline to begin by confronting the brutal facts, whatever they are.  We’re not getting out of here by Christmas.”

Prevailing through the Covid-19 recession

As much as we want to believe this crisis will be over by the end of May, it may not be.  It probably won’t be.  If you only hope and pray for the best, your business may not get through this.

You must temper your optimism with realism, and you must act quickly.  While you hope for the best, you must simultaneously prepare for the worst, and I don’t just mean to prepare mentally.  You must anticipate difficult situations that may arise and decide in advance how you are going to respond to them.*  Then when the time comes, you must take immediate, decisive action, no matter how painful it may be.

Regardless of what happens to you and your business, when this crisis is over, you will recognize it as a defining moment in your life and the life of your company.  Face the harsh realities and decide now that you will do the difficult things necessary to come out of this still in business and stronger than before.