How to Have Healthy Conflict at Work 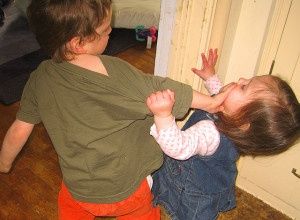 When I was 10 years old, I went on my first sleepover to my Irish Catholic friend’s house. Approaching the carport, I heard a commotion and was shocked to see the whole family of ten gathered, watching their two youngest kids in an all-out fist fight, and Mom and Dad making bets with the others on the outcome!

I was stunned to see this taking place because the atmosphere in our home was so different. My mom and dad were brought up in strict households, and they adopted the stern parenting style they experienced as children. There were eight of us kids, and conflict was common, just as it is in any family, but it wasn’t tolerated. Our parents were both Sergeants during WWII, and they kept us quiet with swift, strict discipline. Consequently, we did not argue or fight (much), lest they get out the belt or the wet dishrag to quiet the house.

In my career, I’ve been in and seen lots of conflict, most of it following one of the two models above. Some workplaces have a no-conflict rule or are controlled by dictatorial bosses who force an artificial harmony on their employees. Others allow free-for-all open combat, with seemingly no harmony at all.

I believe that neither way is correct. Suppressing all arguments leads to passivity, and worse, passive-aggressive behavior, or “yes men” surrounding the King. Frequent unrestrained fighting, on the other hand, leads to hurt feelings and a forgive-but-never-forget atmosphere at best. It also causes any team member who isn’t accustomed to this kind of arguing to shrink into the background and withhold their valuable input out of fear.

The right way to deal with conflict is somewhere in between these two extremes.

Health is a key component of a cohesive, functional leadership team, and you can’t have a healthy team if you don’t allow healthy conflict. We must create a safe place for everything to be discussed, no matter how sensitive, and there can be no issues that are off-limits.

When I explain the “House Rules” in my sessions with clients, the last and most important rule is:

No elephants and no sacred cows. If it’s going to hurt, start by saying, “With all due love and respect…”

This is a way to introduce a sensitive topic with gentleness and cues your co-workers that what you’re about to say is something they need to hear, but may not want to hear.

Dysfunctional families are common (is there such a thing as a fully functional family?!), but the happiest ones always know how to handle healthy conflict. It’s the same in business, too.  As a leader, you have to work hard to build and maintain a cohesive leadership team.  Because as the leadership team goes, so goes the rest of the company. If your team isn’t healthy, your business won’t be, either.